How works Tai chi and Qigong for healing on Cancer

Regular practice of Qigong exercise therapy has the potential to improve cancer-related QOL and is indirectly linked to cancer prevention and survival. Wide-spread access to quality Qigong in cancer care programming may be challenged by the availability of existing programming and work force capacity.

The review particularly focuses on the possible benefits of Tai Chi for cancer survivors since Tai Chi has been shown to increase immune response as well as psychological function, but only 2 randomized controlled studies have been conducted with cancer survivors. Both studies show improvements in either quality of life or functional capacity, but further research should be undertaken before any solid conclusions can be made about the usefulness of Tai Chi for cancer patients -
--Medscape Today, from WebMD, 10/26/2010 Read entire article at

Tai chi has shown potential for improving quality of life and functional capacity (the physical ability to carry out normal daily activities, such as work or exercise) in women suffering from breast cancer or the side effects of breast cancer treatment. For example, a 2008 study at the University of Rochester, published in Medicine and Sport Science, found that quality of life and functional capacity (including aerobic capacity, muscular strength, and flexibility) improved in women with breast cancer who did 12 weeks of tai chi, while declining in a control group that received only supportive therapy.  Harvard Medical School

The practice of Qigong significantly improves fatigue in older men with prostate cancer, compared with a stretching regimen, according to a new study.

The favorable outcome adds to a small but growing body of evidence indicating that the ancient Chinese practice is uniquely suited to improve this vexing cancer symptom — especially in elderly patients.

Qigong consists of "slow, flowing movements, coordinated with deep breathing, and a meditative focus to balance the flow of 'Qi' or life energy for overall well-being," write the study authors, led by Rebecca Campo, MD, from the Huntsman Cancer Institute at the University of Utah in Salt Lake City.

CONCLUSIONS: A 12-week TCC exercise program decreases HbA1c levels along with an increase in the Th1 reaction. A combination of TCC with medication may provide an even better improvement in both metabolism and immunity of patients with type 2 DM.

The link between oxygen and cancer is clear. In fact, an underlying cause of cancer is usually low cellular oxygenation levels. 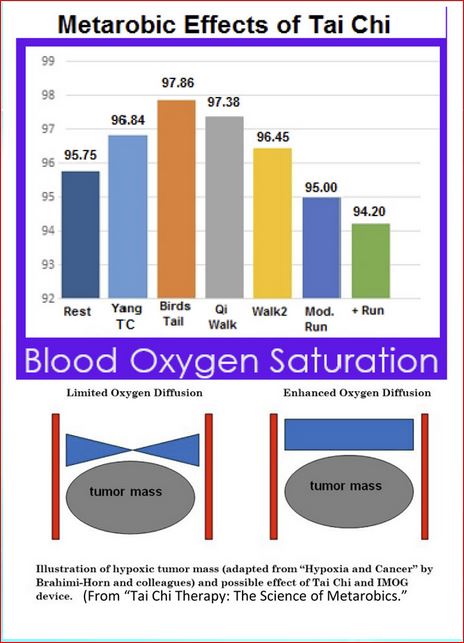 "Traditional Chinese Medicine (TCM) believes that the human body’s internal chi becomes out of balance, or that “external devil chi” may cause cancer.

Many theories debate the reason cancer forms. Each healing system has its own explanation why humans get cancer. Some believe that diet or chemicals may cause cancer. Some believe that our environment contributes to the problem and some believe that emotions are one of the causal factors. Traditional Chinese Medicine (TCM) believes that the human body’s internal chi becomes out of balance, or that “external devil chi” may cause cancer. Some medical doctors believe genetic factors can predispose one to cancer, although medical studies to date have failed to conclusively prove this theory. Some studies find that CT scans, X-rays, radiation, chemotherapy, and many drugs can cause cancer. In theory, when we find the cause of disease, then we can eradicate the disease. So far, the medical and scientific communities only know some of the factors that may relate to the cause of cancer. It is extremely difficult to follow all the recommendations that may prevent cancer. Though society devotes a lot of money, time, and attention to fighting and preventing cancer, the cancer rate still has not been lowered. On the contrary, results of current medical studies indicate that the cancer rate continues to rise each year. Now, one out of four Americans is diagnosed with cancer during their lifetime. Logically, we are taught to believe, supporting ongoing medical studies will result in a reduction of the cancer rate. However, many cancer experts continue to study their concept for cancer prevention and they still find the same problem; the rate keeps rising. The prevention and healing of cancer is still a dilemma for the worldwide medical community." Refer

"Many doctors, when healing cancer, advise their patients to get more fresh air to increase the amount of oxygen, or to practice deep breathing because improper breathing causes oxygen deficiency. Also, they advise their patients to use aerobic exercise to increase the capacity of the heart to pump blood, which increases the capacity of the lungs. Increased oxygen may help the healing of cancer. However, it is very confusing because many people live in the mountains or forest and still get cancer. Many patients are already too weak to jump or exercise because of their cancer or side effects from the chemo, radiation, and surgery.