This Form consists of 12 exercises adapted from over 50 Dao Yin Health Qigong forms. Movements are graceful and easy to learn. It combination of meditation, leading chi go through body meridian with regulations of breathing. Daoyin Qigong is integrated breathing exercises through the practice, it regulates your whole body system includes:mind, lung, heart, internal organs and therefore to achieve the maximum of harmony balance in living. Daoyin qigong is part of Traditional Chinese Medicine as nature therapy for thousands of years. Practitioner simply enjoy your own body music of regulation of breath, feeling the chi flow through your body like wave in the sea, one after the other, therefore achieve the highest enjoyment of living.

A great qigong or chi gong sequence from professor Zhang Guangde: Guiding and Harmonizing Energy to Regulate the breath. Dao Yin Yang Sheng Gong Shi Er Fa is a new series of Qigong exercises that was designed and compiled by the Chinese Health Qigong Association. It consists of 12 steps of exercises from over 50 routines of Daoyin health qigong developed since 1974 by Zhang Guangde, a professor from the Beijing Sports University. Based on the principles of Traditional Chinese Medicine concerning viscera and meridians, yin-yang and the Five elements, and qi and blood. This new set of qigong exercises combines Daoyin with healthcare, limb exercises and mental cultivation, being graceful in movements, easy-to-learn, suitable for all ages, and effective for keeping good health and prolonging life.

In the 12 steps Daoyin Health Preservation Exercises, each movement is executed in circles of different sizes, including hand, foot and body movements, in continuous, cycled, repeated modes like silkworms making silk, clouds drifting and water flowing.

The circles of different sizes exactly correspond to the circular paths of all the things in the universe. they not only increase the flexibility of all the joints of the body, but also strengthen the muscles, bones and ligaments. Even more important is its reflections the coordination between the rise and fall of the movements and the qi circulation of the internal organs, and the harmonious relationships between man and nature, which means the "harmony of man with nature". This undoubtedly has certain effects on improving the physique, preventing and treating illnesses, and prolonging life.

The Movements, In both Standing and Sitting stance, Include:

Meaning of the name Ji Chang Shoots a Louse

The master told him: “if you want to learn to shoot arrows well, you must see a very small object as a very large one, and see a vague object very clearly.”

So Ji Chang went home, caught a louse, and hung it up tied to the tail hair of an ox. He faced south and fixed his eyes on the louse every day. Three years later, the louse looked as big as a cart wheel to him, while other things looked like as a big as hills. He made a bow and shot an arrow straight through the louse, leaving the ox tail hair intact. 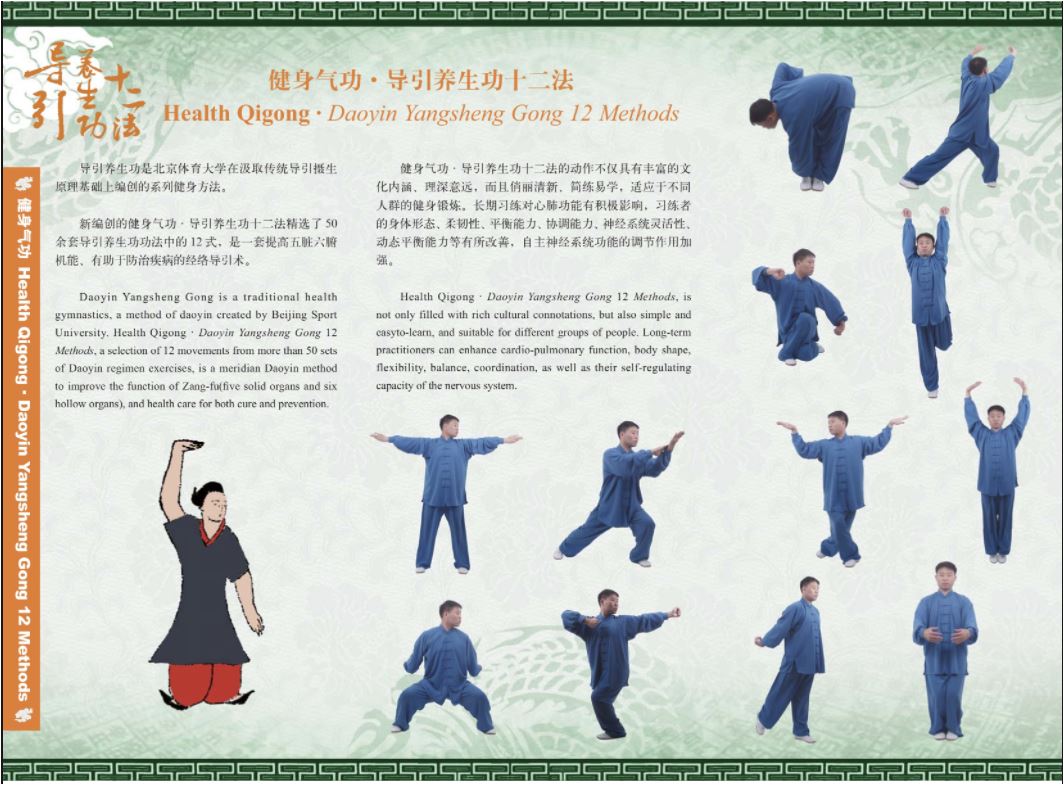 Professor Zhang Guangde is one of the best known Masters of Chinese Martial Arts. He has practiced martial arts for sixty years and taught across China and around the world for thirty years. He has written thirty books and numerous articles in China. In 2005, he helped establish the International Institute of Dao Yin Yang Sheng Gong in Biarritz, France. There are today over four million people practicing his version of Dao Yin.