More evidence from Harvard researchers show health benefits of meditation:
“The medicinal benefits of meditation and yoga are now firmly established in scientific literature. One of the latest studies to emerge on the matter comes from Harvard researchers working at Massachusetts General Hospital (MGH). They determined that meditation literally rebuilds the brain’s grey matter in just eight weeks. It’s the very first study to document that meditation produces changes over time in the brain’s grey matter.” 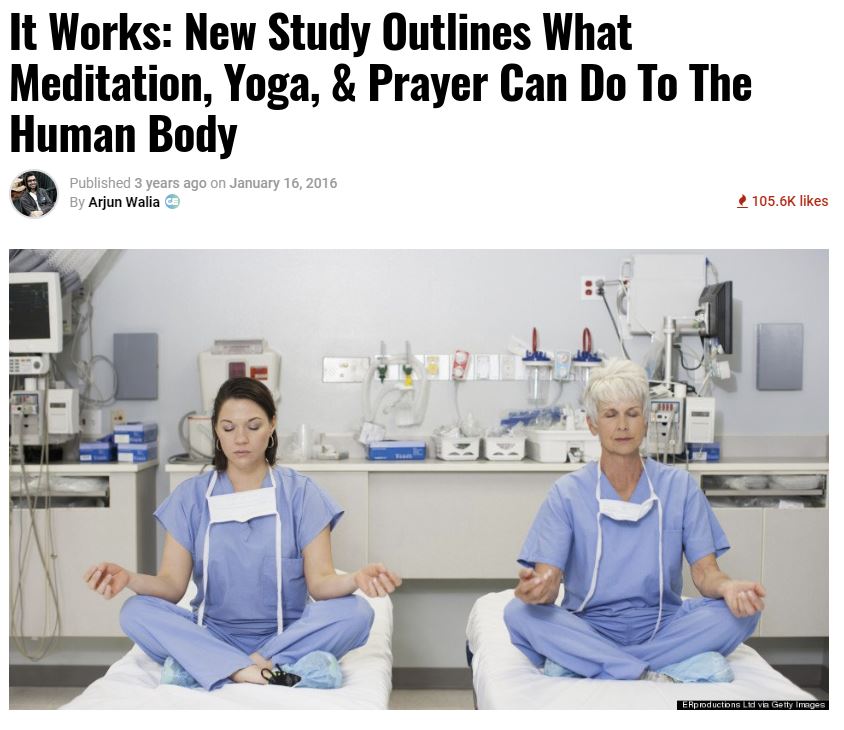 Another promising study has recently come out of the Benson-Henry Institute for Mind Body Medicine at Massachusetts General Hospital (MGH) and Beth Israel Deaconess Medical Center (BIDMC). These researchers conducted the very first study where the use of the “relaxation response”was examined in patients with Irritable Bowel Syndrome (IBS) and Inflammatory Bowel Disease (IBD), and the first to investigate the genomic effects of the relaxation response in individuals with any disorder. The report was published in the journal PLOS-ONE. (source)

When it comes to ‘prayer’ or ‘distant healing’ — directing human attention on physical systems — significant results have been obtained that warrant further investigation. For a selected list of downloadable peer-reviewed journal articles reporting studies of psychic phenomena, mostly published in the 21st century, you can click HERE.

Scientists over at the HeartMath Institute have demonstrated that when a person is feeling really good, and is full of positive emotions like love, gratitude, and appreciation, their heart beats out a different message that’s encoded in its electromagnetic field, which in turn has positive health effects on their body overall. You can read more about that here.

Factors associated with human consciousness (thoughts, feelings, emotions, perception, intention) have long been studied to see how they affect and interact with our physical world. You can read more about that here.

The Power Of Meditation, Yoga, & Prayer on Human Health

Meditation, yoga, and prayer are all grouped into a category (in medical terms) called ‘relaxation-response techniques.’ These techniques have been subject to several studies which clearly show that regular practice directly affects physiologic factors such as heart rate, blood pressure, stress, anxiety, oxygen consumption, and more. It was first described over 40 years ago by Herbert Benson, Director Emeritus of the Benson-Henry Institute and co-author of the paper presented in this article.

The new study, out of the Harvard-affiliated Massachusetts General Hospital, from the Institute for Technology Assessment and the Benson-Henry Institute (BHI) for Mind Body Medicine, found that people participating in the ‘relaxation-response program’ actually used fewer health care services in the year after their participation, compared to how many they used the previous year.

The Harvard gazette reports that relaxation response techniques, such as meditation, yoga, and prayer, could reduce the need for health care services by 43 percent.

“Our study’s primary finding is that programs that train patients to elicit the relaxation response — specifically those taught at the BHI — can also dramatically reduce health care utilization. . . . These programs promote wellness and, in our environment of constrained health care resources, could potentially ease the burden on our health delivery systems at minimal cost and at no real risk.” – James E. Stahl, lead author of the study

The study was published last Tuesday in the journal PLOS ONE.

So, how did the research team analyze the impact of mind-body interventions on modern day medical techniques? They gathered data on people who have been participating in the BHI Relaxation Response Resiliency Program for the past eight years. After analyzing more than four thousands participants, and comparing it with a control group of almost fourteen thousand (while also taking other factors into consideration — read the study for more), the participants engaging in the relationship program displayed an average reduction of 43 percent when it came to using their regular health care services over the year after their participation in the project.

“I think of it this way: There are many gates to wellness, but not everyone is ready to walk through a particular gate at a given time. From a public health perspective, it is better to be prepared to offer these tools to people in their customary settings than to wait for them to seek out these interventions. For that reason, we feel that mind-body interventions — which are both low-cost and essentially risk-free — should perhaps be incorporated into regular preventive care.” – Herbert Benson, founder and director emeritus of the BHI and co-author of this current study

Personally, I believe a common misconception about meditation is that it must be done in a special way, or you must sit in a certain position. All you have to do is place yourself in a position that is most comfortable for you and focus on your breath, in and out. It’s not about trying to empty your mind, it’s about more so about developing a “non-judgemental awareness of sensations, feelings and state of mind” (source). Let your thoughts and feelings come and go, then return your focus to your breathe. Telling yourself not to think will only produce the opposite effect, but you can work on choosing how to feel and respond to those thoughts. Meditation can be similar to state of mind, in that some might have the ability to produce the same brainwave frequencies that are commonly seen in meditators without actually meditating. On the other hand, there are many devout students of meditation who spend hours of their time each day devoted to this ancient practice.

If you are someone who doesn’t have much experience with meditation and would like to try it, you can check out some of our articles on the topic that offer some advice/tips on meditation, as well as find some guided meditations here.

As far as yoga goes, here is a 20 minute yoga class for complete beginners, and here is a list of articles we’ve written that provide more instruction and information about yoga.
www.collective-evolution.com~